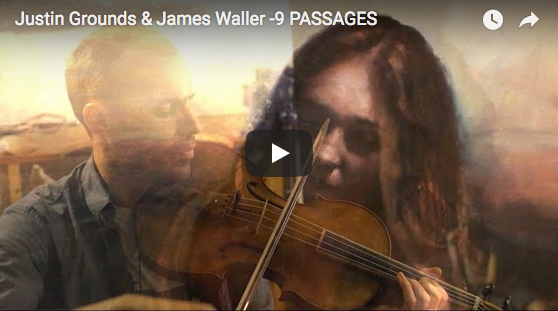 “9 Passages was composed directly in response to James Waller’s body of paintings ‘The Secrets of Pangaea’. I set out to create a piece which had echoes of the baroque in both its form and style (a passacaglia of sorts; 9 melodic variations in increasing complexity over a ground bass line, and played on solo baroque viola), but also radically post-modern in the sense of bringing together both the electronic and the acoustic, with each ‘passage’ being accompanied by textural field recordings, at times filtered through granular delay and reverb.

After spending time with the paintings, and being loaned a beautiful baroque viola by luthier Andrew McGinn, the music quickly took shape, with a dark, foreboding sense of harmony and movement. The bass line is a repeated figure which could be controlled by a foot pedal sending midi notes to a synthesiser, and the field recordings bring the listener on a journey from city streets, with almost prophetic cries from a street caller, to radio static, a train journey, the bells of Taize to the bells of goats in a pasture.” – Justin Grounds, July 2018